In this lesson, we will see some words and definitions, along with examples for clarity. 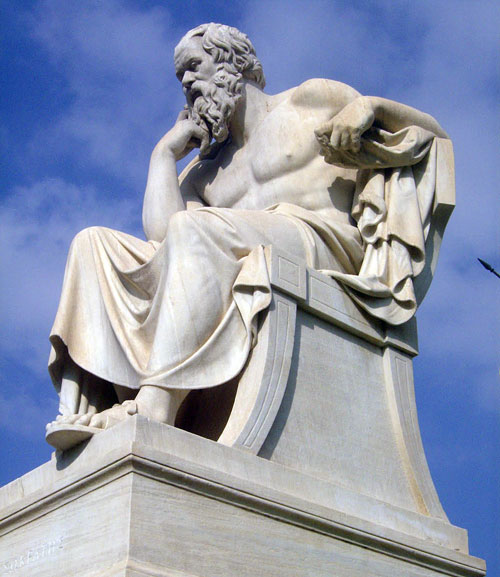 Socrates, probably has a beard!

Throughout these lessons, you will encounter words like "Validity", "Reliability", "Argument", "Refutation"..etc. But you may find it difficult to distinguish between them.

First, let's start with the words "Argument" and "Evidence".

You may have heard some people using the words "argument" and "evidence" as synonyms, whereas in fact these are very different words, that have different uses.

An argument is a structure that starts with premises and ends with one or more conclusions, that is what an argument is all about. Arguments can be valid, invalid, sound, unsound, reliable or unreliable.

Example of an Argument : Premise 1: Socrates is a Greek.
Premise 2: All Greeks have beards.
Conclusion: Socrates has a beard.

So, what makes it an argument? simple : it has Premises (Premise 1, Premise 2), and a conclusion. Regardless of whether premises or the conclusion are true or false, That is what an argument is.

Arguments can be Deductive, Inductive or Abductive arguments .. And an argument maybe deductive and inductive at the same time.

The first argument is a Deductive Argument, in that it has Premise 1, Premise 2, and a conclusion .. And we may also consider it an Inductive Argument, in that we can verify Premise 1 and 2 inductivly, by means of observation, to determine whether Socrates has a beard, or whether all Greeks have beards, and to conclude whether the conclusion is probably true or false.

Notice that our argument, although deductively valid, has one inductively false premise (Premise 2), and this does not make the conclusion necessarily inductively false. Which means that the relationship between induction and deduction is very tricky.

So, if you go back to our argument, and study it deductively, you could confirm that it is indeed a valid argument, by looking at its syllogistic form (Syllogism 1).

But if you study it inductively, then you could confirm that one of its premises is false, although the conclusion is probably True (Syllogism 2).

I hope you see what I mean. Now let us talk about the word "Evidence".

Evidence is an inductive and scientific word. If you consider a statement True (for example the first premise in our argument : Socrates is Greek), then you should provide evidence that can prove the statement is inductively "probably" True.

And, unlike arguments which can have false premises or conclusions. Evidence cannot, by any means, be false and still be refered to as "Evidence".

Evidence is, epistemologically speaking, a very strong word, and a rational agent ought to utilize this word cautiously.

Always use the word "argument" when talking about a structure that consists of "premises" and "conclusions", regardless of their truth value. And do NOT use the word "evidence" unless you have statements that are considered TRUE and RELIABLE by all the parties involved in the argumentation or discussion (especially, scientific or factual evidence).

The fossil record supports evolution because it is what evolutonary theory predicts, and by abduction, any other explanation would be more complex than the evolution of life by means of natural selection.

Let us look into this argument in detail.

Premise 1: IF Genetic comparisons and the fossil record point to the fact that species appear slowly and gradually while respecting a certain order AND are genetically related as evolution predicts. THEN Evolution is probably True.

This statement is a conditional statement, since it consists of an "if ... then".

It is a deductive premise. In that it does not say anything about whether "Genetic comparisons and the fossil record point to the fact that species appear slowly and gradually while respecting a certain order" or that "they are genetically related", or that "evolution is probably true". It just establishes a conditional relationship between genetics, species' appearence in the fossil record, and evolution's reliability based on its predictions.

Since it is a deductive premise, you may or may not agree with it. But your disagreement would not be reasonable by means of abductive reasoning as we will see in the next lesson (Hint : the premise is probably true, as it appeals to the simplest explanation, using Occam's Razor, so you cannot, abductively speaking, refute it unless you provide a better and less complex explanation, that's what abduction is all about).

Premise 2: Genetic comparisons and the fossil record point to the fact that species appear slowly and gradually while respecting a certain order AND are genetically related as evolution predicts.

This premise is an inductive statement, you cannot refute it because we know, inductively, that this is probably true, since we have irrefutable strong evidence, that is: these are pieces of "evidence" and you cannot reject them.

So, as we said, evidence is always probably True, it cannot be false, because it is scientific, there are observations and experiments, that make it reasonable to consider this premise as strong evidence.

This is an inductive conclusion, evolution is "probably" true (like 90-99% certainty), because we know that:

Therefore, the conclusion is probably true (by deduction, You can check its validity, we have a Modus Ponens here and we will see what that means later).

As I said, in the next lesson we will see why the first premise is probably true by abduction.

Validity and Invalidity of a deductive argument:

Reliability and Unreliability of an inductive argument:

An argument is reliable, if and only if, inductively speaking, all its premises are probably true, and the conclusion is probably true . Regardless of whether it is valid or not.

Which means that you can have logically valid arguments, but none of your premises or conclusions is probably True.

The argument above is deductively valid, since premises imply the conclusion. But it is inductively unreliable because we do not have any evidence backing the second premise.

So far we saw Validity and Reliability, but what is Soundness.

A sound argument is an argument which combines both : deductive validity and inductive reliability, which means that All premises and the conclusion are inductively probably true, AND the conclusion follows from the premises.

The argument is sound, because we have a Modus Ponens (of the form, if P then Q, P, therefore Q). And Premise 2 is inductively true, and the conclusion is inductively probably true.

If the argument is reliable but invalid, or valid but inreliable, or both, then it is an unsound argument.

A statement or proposition is true, if and only if, its claim matches an event or a state of affairs in some actual world.

A statement or proposition is false, if and only if, its claim does not match any event or state of affairs in all actual world.

What it means, is that, whether we know it or not, or whether we have evidence or not, a statement is true if it projects on reality, even if that reality is in another Universe or world.

That is what "truth" is about. Inductively speaking, we can prove some statement is true or false.

So, that is what truth and falsehood are all about.

Proof and Refutation are two concepts that are used to appraise inductive statements, to prove a statement, means that you have evidence to back it, that shows that there is a good reason to think that such or such statement is probably inductively true.

For instance, "ships disappearing over the horizon" is a proof, or proves that the earth is curved. While the same statement is a refutation, or refutes the claim that it is flat.

Finally, let's talk about what makes a Good Argument:

A good argument is an argument that fullfills the following requirements:

The opposite of a good argument, is a bad argument.

The argument is good because, it is a Modus Ponens (hence deductively valid), the premises are very evident to rational persons, except if they are ignorant, then we should show them that the premises are probably true..

It is also a good argument, because the premises are reliable, and it avoids ambiguity and amphiboly in that we know exactly what the words mean. We also know that it avoids the appeal to emotions since we don't have any emotional language used in the premises or conclusion.

It is relevant to the subject matter as long as we are arguing about the shape of the earth, and not about shakespear's Hamlet.

That's it for this lesson, in the next lesson we will take an in-depth look at abductive reasoning, along with examples to make it as clear as possible.

Words have precise meanings, learn them !